The subject matter of comparative politics is domestic politics or peoples. It deals with political activity, processes and power. The goal of comparative politics is to encompass the major political similarities and differences between countries. The subject looks forward to developing a perspective on the mixture of constants and variability which characterises the world’s governments and the contexts in which they operate. As suggested by GA Almond et al., ‘Comparative Politics is the study of political systems, not as isolated cases but through generalisation and comparisons.’

Although widely used, comparative political analysis is not free from limitations. While comparing, one faces the problem of a standard and precise definition of various important concepts and terms in the discipline. Many political terms used in the field also suffer from ambiguity.

There are serious difficulties in collecting information and data about the political systems and other non-state institutions. Political behaviour is not necessarily conducted on a rational basis or scientific principles, thereby rendering a scientific study more difficult. Further, the roles that individuals play in the politics of their country cannot be subjected to uniform rules as evolved by a student of comparative politics.

2] Examine the significance of comparative method in political analysis. Discuss its limitations [2019/20m/250w/2a]

As suggested by Alexis de Tocqueville, ‘Without comparisons to make, the mind does not know how to proceed.’ The comparative method in politics has several significances;

Even to understand our own politics, we must study other countries as well. We often take the political institutions, practices and customs in our own country for granted, assuming them natural and inevitable. But only when we start looking around do we understand that our own ways are sometimes unique, even odd or peculiar.

Knowing the history, culture and institutions of different countries helps us to understand and explain their actions and perhaps change the situation for the better.

However, the comparative methods are also criticised at times. Critics argue that it does not answer value questions, although it may provide evidence that helps some people to make up their minds about them.

Even after dealing with facts and empirical evidence, it often lacks an adequate supply of data. There is an asymmetry in the availability of data. The wealthiest countries produce more organised data, but poor countries mostly do not release data for reasons like lack of resources or intentionally hiding facts.

Comparative methods lack tools that can help to make statements of universal political truth and misses scientific character. It deals in probabilities, not certainties. It can only make if-then statements of a probable or likely kind and does not give any laws on the working of an institution.

Moreover, every country in the world is unique, so wholesome comparisons are impossible. No single factor can serve the purpose of a comparative study of diverse political systems and the highly political behaviour of the people.

The discipline has witnessed a lot of changes throughout history. Until mid 18th century, the method of comparison was largely normative and philosophical. The outcome of studies was a blueprint and prescriptions for the future of the state.

With the establishment of democracies in the west from the 18th century, the focus shifted to the study of constitutions and statutes (legal-institutional approach). It focused exclusively on western countries since the rest of the world was colonies and had no independent system.

After the 2nd World War, many new countries (former colonies) were established. In these states, there was a difference between theory and practice, text and context. Social structure played a prominent role in these states and the study of the constitution was not sufficient. The legal institutional approach was found inadequate. This gave rise to many Modern comparative approaches. Political sociology and Political economy are prominent amongst them.

The political economy approach focuses on the issues at the interaction of economy and politics. It analyzes the macroeconomic policies of the state. The role played by various political organs like bureaucracy, judiciary, the legislature in the formulation and implementation of such policies. It even studies the tariff structures of state and the influence of domestic and international factors in determining these

The political economy approach is widely used. It has the advantage of being quantitative as well as prescriptive. There are also a lot of variations in political economy. While liberal scholars like Adam Smith support the laissez-faire model of the economy, Marxist scholars suggest common ownership of means of production.

The disadvantage of the political economy approach is that it focuses only on economics and hence cannot be used alone. It should be used with other approaches for broader and better understanding

4] Explain the political-sociological approach in the field of comparative politics and discuss its limitations. [2017/10m/150w/1a]

Comparative politics deals with comparing the politics of different countries. Several new methods have developed in the field with the evolution of politics.

After the 2nd World War, traditional methods of comparison were found inadequate for analysis of 3rd world countries. This gave rise to the development of modern comparative approaches, including political sociology.

The approach focuses on the issues lying at the interface of politics and society. In modern times Marx can be considered a political sociologist, who suggested the role played by the basic structure of society in determining politics (superstructure).

There are 3 main approaches in political sociology. Pluralists focus on the role played by public opinion, interest groups and social movements in politics. Elitists like Weber focus on role played by elites. Marxists, on the other hand, suggest that the capitalist, propertied class sets the agenda and exercises power in politics.

Although the political-sociology approach is quite popular, there are certain limitations. It emphasises too much on society. So much so that there is fear of discipline getting submerged in sociology and Theda Skockpol calls for ‘bringing the state back in.

However, we can say that politics is too complex. There are multiple forces at play. A single approach is never sufficient for analysis. Thus, political sociology can be used with other approaches for comprehensive understanding.

5] Critically examine the Marxist aspect of Political Economy approach to the study of comparative politics. [2016/10m/150w/1a]

The Marxist aspect of the political economy focuses on the politics of least developed and developing countries in the context of imperialistic exploitation and neo-colonialism. Here, the centrality shifts from the state to the class, even in the international arena.

It provides a broad-based vision of society in all stages of development, and its base lies in the fundamental importance of production.

The Marxist approach does not make superficial comparisons between the political processes and institutions of the advanced countries with the third world countries. Instead, it studies the working of the political system of the poor and backward countries in the light of inputs coming, the impact of international economic forces and the resulting output.

Marxist aspect is scientific and progressive. It rejects the present world order as oppressive, exploitative and inequalitarian. It desires to set up a new system of cooperation and harmony. It starts as empirical and gets normative with its belief in glorious human values.

The weakness of the Marxist aspect lies in its conversion into an ideology. It is criticised for culminating in the pseudo-scientism of degenerated Marxism as its perspectives become so rigid that the scholar gets confined within a specified parameter.

6] Which are the major approaches of comparative politics? Explain in brief, the Political Economy approach to the study of comparative inquiry. [2015/10m/150w/1a]

Of these various approaches, political economy remains an important tool. Political economy shows the interface of economics and politics. Friedrich Engels defined it as the laws governing the production and exchange of material means of subsistence. Political economy examines the manner in which social values are transmitted and the structures through which resources are distributed. It studies the influence of political factors on economic outcomes of state and vice versa is studied as well.

This approach is quantitative as well as prescriptive. The different schools of thought under this approach are: classical, utilitarian, Marxist, neo-liberal, welfare economics and public choice. However, the approach focuses only on the economic elements, which leads to the neglect of normative methods and cannot give a comprehensive understanding. Thus, it needs to be used with other approaches.

David Easton is the most important political scientist to use system analysis. His highly appreciated book ‘A Systems Analysis of Political Life’ talks about his original set of concepts.

According to Easton, a political system is a set of interactions abstracted from the totality of social behaviour, through which values are allocated for a society.

Like the natural systems, social systems also possess a self-regulating mechanism that he calls the feedback mechanism. It transmits information to the system, both negative and positive and helps it change, correct and readjust its processes and structures while retaining its identity. Hence, the political system is dynamic in nature.

A political system is consistently under challenges from forces in the environment called stress. There is demanding stress when the system fails to cope according to the feedback given on its earlier output or its incapability to deal with a particular range of demands.

The survival of a political system requires certain structural bases termed ‘objects of the support of the system’. For instance, electoral machinery, political parties, political beliefs.

Although Easton tries to be ‘scientific’ and elaborate, his theory has been criticised for being too abstract and unable to explain several political changes and events like revolutions. However, it can also be considered meritorious for offering a framework that is dynamic, normative and scientific in nature.

Posted in PSIR 2A QA

8] Evolution of the International Economic System Q & A 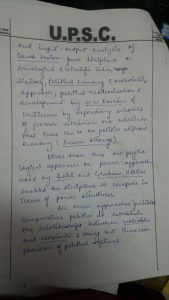 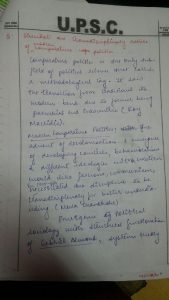 For small answers, there is no need to create a background. We can directly start answering – with one/two line introduction.
Additionally, I feel Political Sociology could have been elaborated along with Pol Economy. Pol Sociology even created fear that the discipline of Pol Science will merge with Sociology, Thus it’s important to quote it when it comes to transdisciplinary question.
Other than this, answer is good. You have good knowledge of the subject. 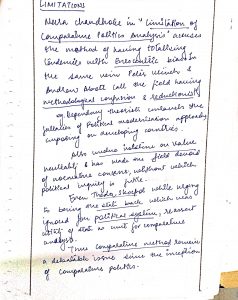 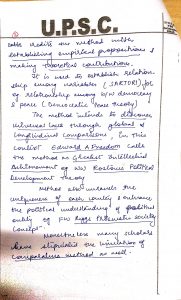 My introduction remain long this time too. I will make it short next time.
Part 1 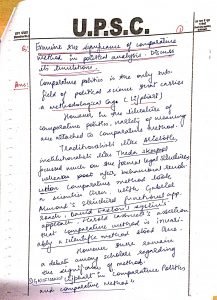 Very nice answer Anchika.
The question was strait-forward : Significance and limitations of comparative method. And you have adequately addressed both the parts.
Additionally, you can give examples as well to prove some point. For example, when you say ‘comparative politics intends to discover universal laws…’, how human rights discourse is a products of such efforts.
Regarding introduction, don’t try to make it small artificially, but try to make it concise. That will automatically make it short. Every time you write an answer, consciously try this and eventually you’ll get the skill.